Note: Those who actually read my blog with any regularity will notice that I am starting a different format with Game Corner with this review.

The Background:
First announced at the 2012 San Diego Comic Con, Deadpool was published by Activision who, at the time, held the rights for all videogames based on Marvel Comics properties.

It was developed by High Moon Studios, who were primarily known for their work on a number of Transformers videogames released between 2010 and 2012; they would also go on to work on a couple of Call of Duty titles in 2016 and 2019 despite the fact that, after completing work on Deadpool, around forty of High Moon’s employees were unceremoniously fired by Activision.

The game is, obviously, based on the Marvel Comics character of the same name; created in 1991 by Fabian Nicieza and Rob Liefeld, the “Merc With a Mouth” has gone on to become one of Marvel’s most popular and enduring anti-heroes whose use of violence, fourth-wall breaks, and crude humour has made him a consistent fan favourite.

Deadpool received mixed reviews upon release and was soon removed from all circulation after Activision lost the Marvel license; once the Ryan Reynolds-starring movie came out in 2016, however, the videogame was re-released for Xbox One and PlayStation 4…before again being dropped due to licensing issues, meaning that the only way to play it now is to pick up a second hand copy.

The Plot:
Bored in his crummy apartment, Deadpool calls up High Moon Studios and threatens them to produce a videogame based on his specifications and soon finds himself embroiled in a battle against Mister Sinister.

Gameplay:
Deadpool is a third-person, hack-and-slash action shooter with some elements of stealth and platforming. Ostensibly taking its cues from the God of War (SIE Santa Monica Studio/Various, 2005 to present) and Devil May Cry (Capcom/Ninja Theory, 2001 to present) franchises, players must use a variety of melee weapons (swords, sais, and mallets, all double-wielded) to hack apart enemies while also employing firearms (pistols, machines guns, and shotguns…also all duel-wielded) and grenades to blow apart anyone who gets in their way.

Deadpool is also equipped with a teleporter to travel short distances or dodge and counter enemy attacks and is tasked with performing some rudimentary platforming across gaps and floating platforms. Deadpool’s teleporter can be upgraded to assist with this and he can also wall jump, clamber up certain ledges, and teleport back to safety if he falls down a bottomless pit.

There are, occasionally, sections of the game where Deadpool must perform a stealth kill; creeping up behind unsuspecting enemies, Deadpool can use any one of his weapons to execute his target in brutal fashion. Attacking enemies builds up Deadpool’s momentum and, by pressing two buttons together and either holding or mashing a button, Deadpool will unleash a super move to dispatch his foes.

Attacking also employs a combo system; racking up a chain of combos awards Deadpool greater bonuses in the form of Deadpool Points (or “DP”), which can be spent upgraded Deadpool’s weaponry and basic stats (such as health and ammo). Deadpool is gifted with a generous healing factor; he can take a lot of punishment, and accrue damage to his costume and person but, if you duck away from the chaos for a few seconds, his health will automatically regenerate. If his health is depleted, you can restart from the last checkpoint, but you can also recover health by eating tacos.

There are a few more ludicrous moments in the game as well, such as when Deadpool’s head is twisted on backwards and he must chase his dog to recover his missing arm all while battling reversed controls. There are also moments where you blast enemies with laser cannons, take control of Rogue after she absorbs too much of Deadpool’s powers and personality, and classic 2D gameplay interludes that help to keep the game fun and interesting.

Graphics and Sound:
The jump to Xbox One hasn’t really done much to improve Deadpool’s aesthetics; the strongest element of Deadpool’s graphical presentation is in the character designs and the over-the-top, gore-filled anarchy of the game’s combat but environments leave a lot to be desired.

While Deadpool’s apartment is full of character and some fun little things to interact with, you’ll quickly find yourself hacking your way through such exciting locations as…an office building, a sewer, and a prison. Deadpool does visit Genosha, which is an iconic Marvel location, and there’s a fun sequence where Deadpool embarks on a spirit quest, but none of the game’s environments are that lively or interesting to look at.

The game’s characters, however, look great; even the enemies and non-playable characters (NPCs) are all rendered in a gloriously over-the-top fashion that evokes Liefeld’s, shall we saw “trademark”, artistic style. Characters are all impossible muscles, jiggling boobs, or massive tanks and they animate with a charm and character matched only by the game’s on-point script.

Sound design is where Deadpool really excels; while gunshots and sword slashes aren’t anything to write home about, the game is almost constantly narrated by Deadpool and his three competing personalities, voiced by the always-amazing Nolan North. Deadpool will quip, break the fourth wall, and comment on everything from the game’s design, his relationship with other characters (especially Mister Sinister, Wolverine, Rogue, and Cable), and, thanks to the work of former Deadpool writer Daniel Way, he is perhaps the most accurate recreation of the infamous anti-hero outside of the movies.

Enemies and Bosses:
Deadpool cuts his way through a whole mess of nameless, faceless goons in his quest to take out Mister Sinister; there’s the standard, everyday grunts who offer little in the way of resistance but then you’ll also have to contend with enemies who will buff their cohorts with shields or attack bonuses. However, things quickly ramp up once Deadpool starts battling Sinister’s clones.

Cloned from some of Marvel’s most famous X-Men, Deadpool battles knock-off versions of Lady Deathstrike and Gambit while also having to content with the likes of Arclight, Blockbuster, and Vertigo. Each of these offers a different challenge that forces you to use different methods of attack: the Gambit clones, for example, rush at Deadpool and explode (all while constantly, hilarious, babbling “Mon amie!” over and over), meaning it’s better to take them out from a distance; the Deathstrikes and other sword-wielding enemies require you to mix up Deadpool’s light and heavy attacks to break their shielding, and the bigger enemies can only be put down by using Deadpool’s speed and more powerful attacks.

Bosses are a slightly different breed; Vertigo will mess up your display and Blockbuster must be dodged, countered, and stunned before your attacks will do any damage. There’s no battles against massive Sentinels, unfortunately, and, quite often, a lot of Deadpool’s boss battles either boil down to a hit-and-run while taking out hordes of regular enemies, punishing endurance battles against waves of opponents, or a simple quick-time event.

Even the final battle against Mister Sinister isn’t all that thrilling; he simply attacks alongside copies (or clones) of himself and, as long as you keep your distance enough to keep your health regenerating and pick up the ammo strewn around the arena, it isn’t all that difficult. The endurance gauntlet that precedes it that sees wave upon wave of enemies relentlessly whittle your health down and then forces you to battle Arclight, Vertigo, and Blockbuster all at the same time is actually a lot harder than this final battle.

Power-Ups and Bonuses:
Deadpool comes equipped, by default, with his trademark double pistols and double swords; as you earn DP, you can purchase additional weaponry that can then be upgraded even further. This will allow your weapons to deal more damage, reward more DP, or make your enemies bleed so they die even faster.

Some of the bigger enemies also drop massive laser cannons or grenade launchers that deal maximum damage but, as far as power-ups go, that’s about it. Deadpool will only get stronger and more powerful if you work to accumulate DP and spend it on upgrading his skills; once you have, though, you can unleash more of his special attacks and increase your odds in battle with more options.

There are also occasions where Deadpool teams up with Cable, who will blast at enemies and help clear them out but, in terms of actual, acquirable power-ups that aid your gameplay, that’s about it.

Additional Features:
Deadpool is a single-player only experience; you’ve got the main story campaign, with three difficulty modes, a Challenge mode, and some character biographies and that’s about it.

In the Challenges, you’ll be…challenged…with battling waves of enemies and graded on your performance; this, and replaying previous levels, is a great way to grind DP to upgrade your weapons and skills but it doesn’t really translate into actual, in-game rewards. There are no costumes, skins, or bonuses to unlock or earn here; it’s simply play, play some more, and work towards getting those Achievements.

Speaking of which, there are obviously some Achievements to get in Deadpool; some are stupidly easy as the game literally just awards you two right off the bat but others are tied into more specific things, like interacting with NPCs, clearing sections in certain ways, repeatedly slapping Wolverine in the face, or surviving the sewer slide without injury. Some of the trickier ones will require a bit more of your time and patience but, if you just want to rack up a bunch of easy Achievements like I do, Deadpool has you covered. 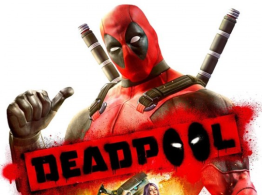 The Summary:
There’s a lot to like in Deadpool; the action is fun and fast, the characters and writing are crude and amusing, and the gore and violence is a blast to take part in. However, the game does suffer from a jerky camera (you can lock it on to a target but I found that more difficult that it should be), some frustrating platforming sections, some bland environments, and some really annoying enemies.

Perhaps the worst thing about Deadpool was the glitchy frame rate; I don’t know if it’s just my version and maybe my disc was a bit smudged or scratched but I constantly found the game would pause and stutter even when there were no enemies onscreen. This meant a lot of missed jumps, broken combos, and just a generally annoying experience, like I was fighting against the game most of the time.

Overall, though, I think there’s enough here for fans of hack-and-slash, third-person action shooters and definitely enough for Deadpool fans. If you’ve never really had any exposure to Deadpool before than this game is a great introduction; once you learn to be patient with the game and enjoy its eccentricities, it’s a real blast to play through.

What did you think about Deadpool? Did you play it when it first came out or were you like me and hunted down a copy later on? Did you have any issues with the game bugging out on you? Leave a comment below and let me know what you though, and your feedback on my new format for Game Corner.

One thought on “Game Corner: Deadpool (Xbox One)”